Understanding and adapting to personality types

Understanding what people do, as well as how and why they behave a certain way, is at the heart of what Bunnyfoot does. Part of this is understanding different personality types and the different stimulus that suit these.

“The meeting of two personalities is like the contact of two chemical substances. If there is any reaction, both are transformed.” – Carl Jung

Each of us sees reality according to our own personality type.  All personality types have strengths and weaknesses, each has something to bring to the table and room for improvement. Understanding your personality type and others helps us understand why we negotiate reality the way we do and ultimately work together more effectively.
Where you fall on the introvert-extrovert continuum is one of the most important aspects of personality. This is basically a measure of the level of outside stimulation you need in order to function well. This will influence your choice of friends, careers, how you make conversation, resolve differences, show emotion (just for starters). Many people will have personality elements of both introversion and extroversion, depending where you are on the scale. If you are right in the middle of this continuum you are an ambivert.
We seek stimulus that allows us to use our skills best. Personality differences are largely a matter of functional preferences, distinct ways of knowing and interacting with the world. The diagram below shows the different psychosocial functions that are part of everyone’s personality. Your preferred functions are not set in stone, they can change at different life stages. 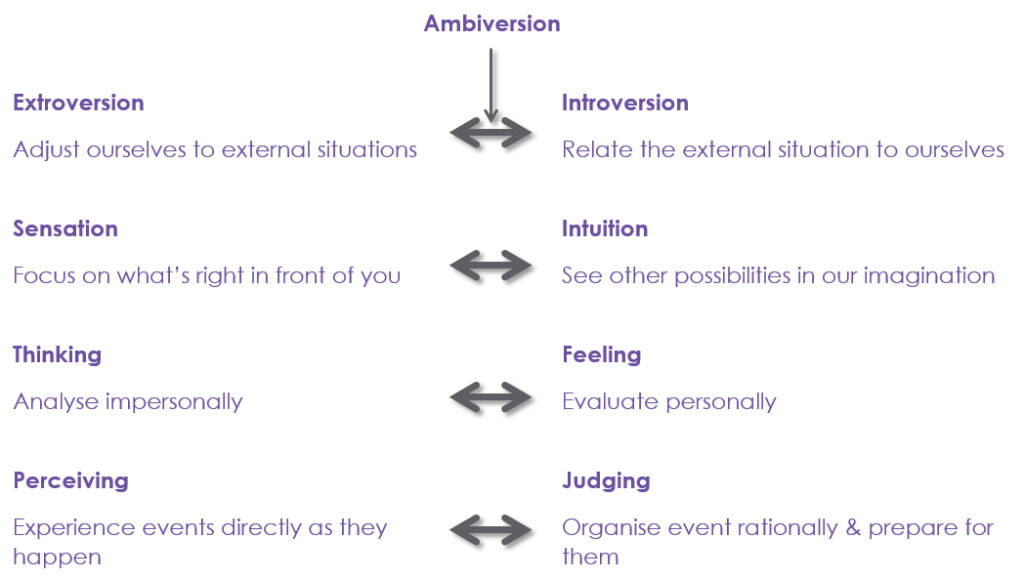 Many psychologists agree that introverts and extroverts work differently. The table below shows the general differences:

How technology can help us all

In western societies we live in an extrovert ideal value system, where extroversion traits are considered preferable. But Cain (2012) says forcing everyone to act like extroverts harms the quality our work and our lives. There are many digital tools that are helping to mitigate this harm.
Studies have shown that face-to-face brainstorming and teamwork often lead to inferior decision making, as social dynamics leads groups astray, merging around the loudest most confidently asserted idea. Hence why we at at Bunnyfoot rarely recommend focus groups and instead lean toward one-on-one research techniques.
Technology such as virtual collaboration tools can be used to allow the way introverts and extroverts work together and complement each other, with team members thinking about solutions alone, before getting together to talk them over. Researchers have found that working in this way, groups generate better ideas and solve problems more proficiently (Cain, 2012). Thus, to get the best out of the majority of a group they need to work alone first and then network later, which could be done online, or face-to-face.

Being able to spontaneously come up with ideas and thinking by talking isn’t necessarily about extroverts having more mental agility / intelligence, but it is about preference for stimulation. Introverts tend to be reflective deep-thinkers that like to have a chance to prepare first. Public speaking is inherently a ‘stimulating’ activity, those who feel over stimulated by public speaking / networking will find their attention and short term memory impaired. But preparation can help greatly for public speaking and networking. Working together will allow extroverts to refine (their) initial ideas and generate new ideas from those presented after solo work. It gives space for introverts and extroverts to think in the way they prefer.
This kind of working practice works for both introverts and extroverts as:

For Bunnyfoot consultants, taking this knowledge into account is useful during moderation in usability testing sessions, for example, it can help us understand what is happening, as part of our observation of participants. Being mindful of the way people act and think (and the potential reasons / causes) is something we can all benefit from.