Usability: It’s About Humanity, Not Technology

Today’s blog post is a classic tale of ‘toilet-lock usability and standards’.

Last week, on a commute back from London, I had cause to visit the carriage’s toilet. I stared blankly at the unfamiliar and (to my mind, unnecessarily) complex locking mechanism for a few moments before settling upon an arrangement of buttons and levers that I was confident would lock the door and ensure me a few minutes privacy. Congratulations to me.

Business completed, I returned to my seat. Several minutes later, a young man entered the same toilet. The door closed but sadly he failed to successfully engage the lock.

Almost inevitably, another passenger approached the occupied toilet and pressed the ‘Open’ button. The door slid quickly back and treated the entire carriage to the sight of the current occupant, who rather than covering himself and screaming “Occupado!” (as I would have done), instead performed a clumsy leap and half-twist to try and hit the ‘Close Door’ button, thus (fully) exposing himself and strafing the cubicle with… well, you can imagine. 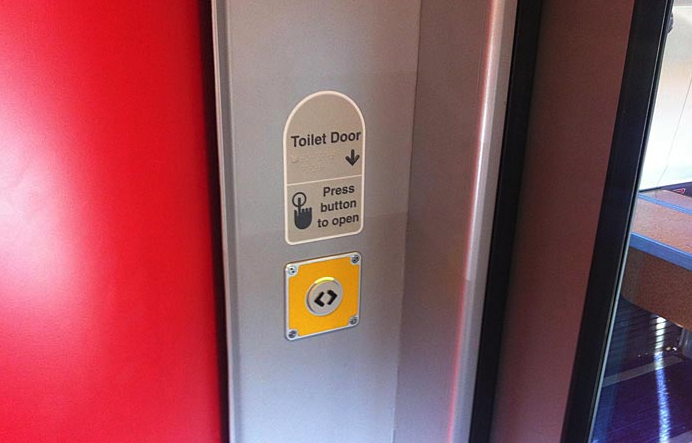 Easier to operate from outside than inside (apparently)

When most people think about or discuss ‘usability’, it’s usually in regard to apps, websites, or even pieces of high technology – not mundane items like bathroom locks. But as this anecdote illustrates, usability is critical to anything that has an interface.

The world abounds with examples of simple objects that defy their intended use: coffee machines that require a PHD to operate, moody taps that will soak your groin, doors that you walk into as they fail to open in the direction you expect… Luckily, our research methods apply just as well to the ‘real world’ as they do to the digital one, so these problems can be eliminated before they wreak havoc in the wild.

At Bunnyfoot, we’re experts in applying usability and user experience best practices to create positive experiences – online or off (yes, that includes bathrooms). If you’d like to chat, get in touch.