Last night, the fifth annual UXUK Awards took place in London – and what a night it was!

This year, three – yes, three! – of Bunnyfoot’s projects made the shortlist (EDF Energy for Best Effect on Business Goals, EasyJet for Best Effect on Business Goals and Sheffield City Council for Best Public Sector)… and we also had a winner! We’re honoured to say that our work with Bimco on their rebranded website won ‘Best Information Experience’ – and we couldn’t be happier. 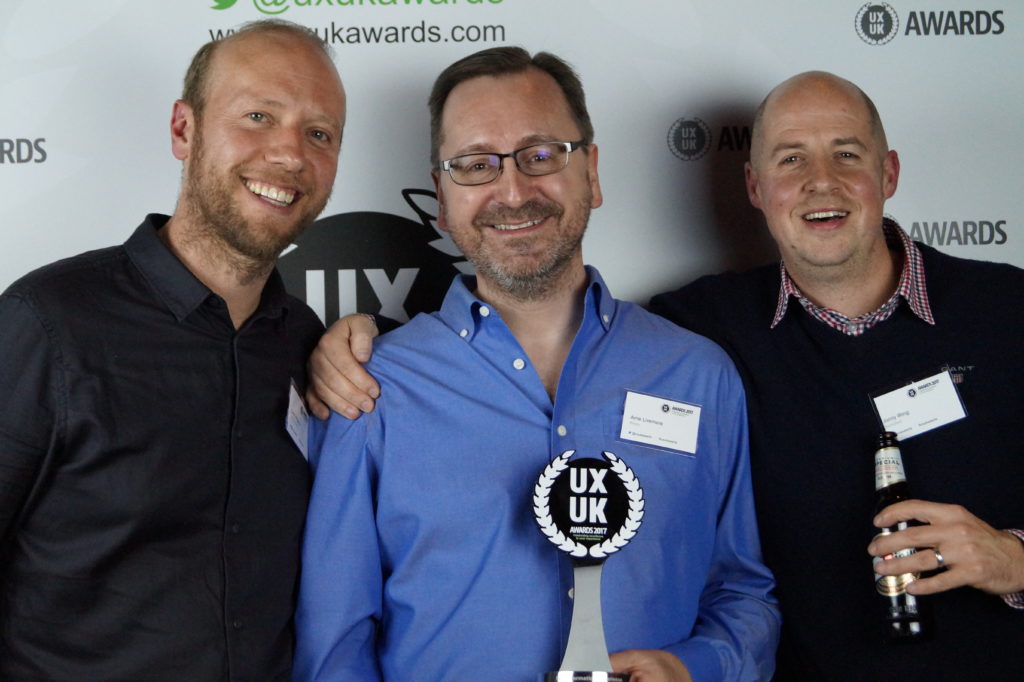 As usual, the calibre of work on show at the awards was extremely high, and was testimony to how much care and passion had gone into every single app, website and service that was entered (which is fitting, given that it was World Usability Day!). All of this just made us even more proud to be a sponsor again this year.

Our CEO, Dr Jon Dodd, was on this year’s judging panel and gave us some insight into each of the winners:

The Beano’s website (designed for kids) was a delight to use, and featured elements of gamification as well as emotional design. In addition, The Beano team did lots of research and testing with children, which really paid off: the site saw a seven-fold increase in monthly traffic and over 2,000 pieces of content were created especially for the site. Not to mention, moving from print to digital isn’t easy – but they created a fantastic website that provided their audience with an entirely new user experience.

The Camden GP Website put all the information that GPs needed into a single website, which they could access with a patient in the room – making consultant times much faster and more efficient. The website was developed with an agency as well as their in-house staff at a low cost, not to mention that the site is being resold to other Clinical Commissioning Groups – delivering even more value to the public.

The judges felt that the EasyJet Travel App was user-focused and efficient. Since the app’s inception, EasyJet have continued to innovate and have now implemented features such as Apple Pay and the ability to show travellers what gate they need to go to when at the airport. Their app is very easy to use and actually improves users’ experiences in the offline world!

Just Eat set out to empower their restaurant partners to grow their businesses and deliver a better service – and they certainly achieved that goal. The research they conducted included interviews, observation, personas and testing, which resulted in some truly impressive figures, as well as increases in many restaurants’ overall performance scores.

Kallidus went through a thorough User Centred Design process, from low-fidelity sketches to an interactive prototype, to usability lab testing. They even tested their prototype with more than 50 users of the existing product – many of whom signed up for the new product on the spot!

Bimco’s website is the world’s largest shipping association, and their website – which has over 300,000 pages – acts as a vital resource for their members around the world. Because of the high volume of content, the categorisation and search functionality needed to enable users to find the resources they required with ease. The subject matter is very specialist, and the process we went through with Bimco – online surveys, user interviews, persona work, card sorting, tree testing and remote usability testing with members from around the world – was extremely thorough. Luckily, it paid off!

Daybook is a digital diary for people with learning disabilities, where they can use videos, pictures or text to describe how they are feeling. What stood out for the judges most of all though was the testing that was undertaken: it was very thorough and they designed the whole thing with the user front of mind. The final product was different to the original brief, but through research, it developed into a properly user centred product.

There are over 1.2 million older people in England who are lonely – and through their telephone befriending service, ‘Call in Time’, Age UK are trying to drastically reduce this number. Through ‘Call in Time’, volunteers sign up to make a weekly half-hour phone call to an older person (who they’re matched with using an online dating profiling technology) to talk and generally enlighten each other’s lives. The project was so successful, Age UK was flooded with more than 2,500 volunteers signing up.

Entice, Engage, Educate is a set of physical installations in the Queen Elizabeth Olympic Park, designed to educate the public about the benefits of bats in the urban environment (as a lot of people don’t like them!). A full User Centred Design process was followed, starting with in-depth interviews and data exploration, progressing through to prototypes at increasing levels of fidelity, tested at each stage. At the end of the project, over 90% of users said they had learned something new about bats, and over 70% stated they liked bats more after the experience.

Congratulations to all of this year’s winners, and to everyone who was shortlisted. Bring on 2018!