The growing importance of Serious Games

When we talk about games, we generally associate them with fun, Serious Games however, have an objective other than pure entertainment. They’re a useful option to help organisations convey messages in more meaningful and interesting ways; can be an alternative aid for teachers to educate their pupils and have even enabled governments to make learning about policies more engaging. In this article, we will touch on the definition of Serious Games, discuss their breadth of use and why they work.

The definition of Serious Games

The definition of “Serious Games” has shifted over time, however the earliest version that still rings true was stated by Clark C. Abt, in the 1970 paper entitled “Serious Games”.

“We are concerned with serious games in the sense that these games have an explicit and carefully thought out purpose and are not intended to be played primarily for amusement”.

This definition frustrates some within the industry as “games” are inherently also meant to be fun.  To simplify matters we will continue with the definition that Serious Games are in fact games that have either been developed or re-purposed with an objective other than pure entertainment in mind.

There have been many different uses for Serious Games over recent years, such as personal development, health, research, social science and of course, for corporate purposes. As an indication of Serious Games relevance and growing use, you may have recently read that the UK and the US will carry out a “cyber war game” to test the resilience of the financial sector in the City of London and on Wall Street.

HOW DOES IT WORK?

WHY ARE SERIOUS GAMES USEFUL?

WHERE ARE SERIOUS GAMES USED?

In 2002, Ben Sawyer created a Taxonomy of Serious Games, this still rings true today, as his table demonstrates, Serious Games are used right from government through to corporations.

There is also a worldwide Serious Game Classification website which allows users to set an age range, a purpose  and a market in order to search for a serious game for their particular subject, topic and learning objective.

LET’S LOOK AT SOME GAMES…

As mentioned above, the benefits of Serious Games are vast and are becoming used increasingly across industries and for varying purposes. Below are three Serious Games which all function differently and with different purposes: curing cancer, Flood Policy and teaching math.

Play to Cure: Genes in Space

This game helps scientists identify faults (potentially cancer-causing) in real gene data at an unprecedented rate. What would usually take hours of analysis can now take minutes as gamers collect spacedust, blast away asteroids and upgrade their spaceships. The more people that play, the quicker the results come piling in. 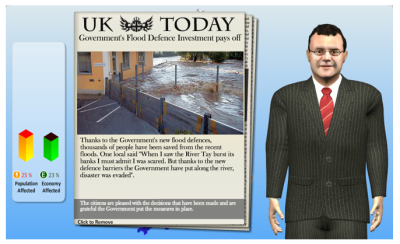 FloodSim is a strategic educational game that covers different aspects of Flood Policy within the UK. This game helps users understand the key issues that Policy Makers grapple with and also enables the government and insurers to gauge public attitude to different types of Flood protection. 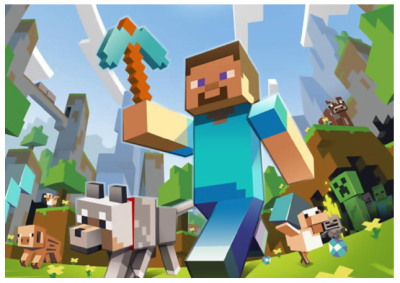 The popular game that has taken the world by storm, Minecraft, is now being re-purposed with an educational approach.

As with anything else, conveying the right message, adhering to user needs and ensuring a positive experience is critical. Game design and UX design overlap and combine to create truly satisfying experiences, giving games (and Serious Games) their best chance of success and uptake.

A good follow up with more information is Jane McGonical’s TED talk “Gaming can make a better world?”