Make sure you do good audience research: observe don't ask

‘Observe don’t ask’ I seem to bleat endlessly like a broken record (showing my age now, I mean a um… corrupted memory sector) ‘what people do  is often very different from what they say they do’.
When you ask people direct questions (even well formed ones) then they are reliant on their concious executive mind, something they often don’t activate when doing the thing you are asking them about, and certainly not in the way that you are asking them. Also they lie (or confabulate as researchers like to call it) and make stuff up based on their assumptions rather than reality (postrationalise). This is because they don’t remember, don’t want to appear stupid, want to please you, want to appear superior, and numerous other things including they just don’t plain know.

What are you looking at?

I’ve got loads of examples and demonstrations of poor research (not carried out by Bunnyfoot I hasten to add) including disastorous actions that major global companies made because they based their decisions on poor (and expensive and extensive) research – those are for another day. Here  I provide a fun example instead. 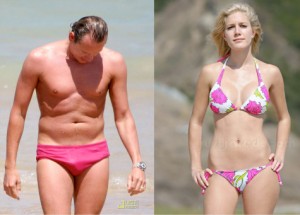 Above picures shown to 30 men and 30 women whilst individually eyetracked. Results below – can you tell which was from the 30 men and which from the 30 women?

If you show people the above two photos and ask them what they are looking at do you think you would get the truth? Well we didn’t do that – instead we showed 30 men and 30 women the photos and tracked where they looked using eyetracking equipment (we do a lot of non-trivial eyetracking research too by the way, and even have a separate brand ‘think eye tracking‘ that does heavy duty eyetracking research – we know what we are doing is the point I am trying to make and this is very much at the trivia end of the spectrum but interesting non the less).

Which data are from the guys and which were the girls?

Hotspot image showing average visual attention – the hotter the more fixations: Was this from the 30 women or the 30 men? 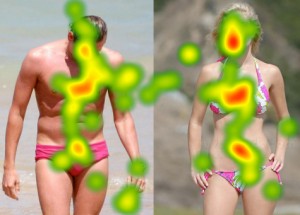 Well here I have asked an obvious question of you, so you would no doubt have seen through my thinly veiled trick but yes the bottom one is the hotspot result from the 30 men – the guys were checking out the male model’s assets more than the women. The point of this simple demo is that they would not have admitted it if we had asked them, and would have probably made something else other than reality up to tell us  (and what they made up would also have been influenced by who was around them at the time e.g. other focus group participants, the sex of the researcher etc. discussions for another time…)
Basically if you can, make sure you perform or commission research that observes real customer behaviour (or audience behaviour) because what people do is often very very different from what they say they do.